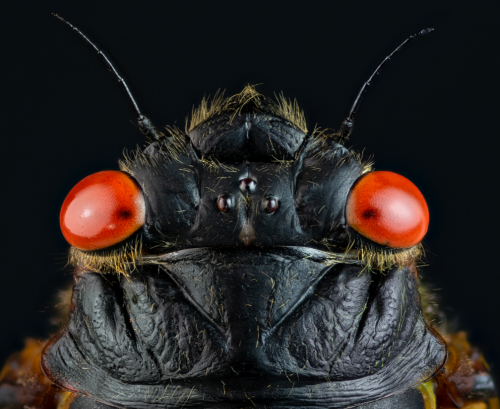 THIS IS CHARLEY THE CICADA. He’s been acting somewhat restless lately, since he hasn’t been out in seventeen years. But he shares Christian beliefs, as you can see from the artful cross on his forehead, which is much cooler than a tattoo. He’s also a person of color, obviously, so he has made an effort to avoid places populated by bigots, Nazis, white power fanatics, and Republicans. Don’t be too startled by the bulging compound red eyes. He has been out celebrating his new-found freedom this past week and I think he overdid it somewhat. In fact, it was likely when he was under the influence that he put those attractive blonde eyelashes on upside-down, below his eyes instead of on top, although you must admit, it is kind of neat and compliments his top-do nicely. We poor humans can only wish that we had nifty antennae like Charley. He can pick up the audio from cable news, sports networks, and even Spotify. He has several distinct voices, one of which is his so-called courtship song, which typically precedes copulation. Be warned, however. Although this song is more melodious than his usual squawk, once you hear it, I recommend that you turn away. Cicada sex isn’t pretty.

Skin around barriers
Ostomy and self image
Compromise
I want it.....
Happy Valentine's Day!
Ostomy Bag issues, hacks and products?
Ileostomy and Gallstones
Travelling
Will I ever feel attractive again
Some people got a severe case of the uglies
All times are GMT - 5 Hours
Currently online: 30
3 members & 27 visitors