It's almost time to say Bye-Bye to these cute guys!!  Here's what 5 of the 6 look like now.  Not sure where #6 kitten is when I took this about an hour ago! 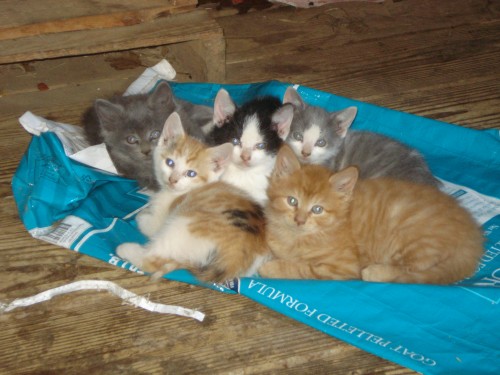 Have you found homes for all of them and are you keeping Mama? They are cute. How did you get them all to look at you at the same time.

Oh gosh.......they are cute! Getting them to all look at me was easy. Being new they'd never seen my cool new cowboy hat......so I just put it on and they were mesmerized! Yes, I'm keeping Momma, but so far I've only found homes for 2 of them so far.

Lovely kittens, I am too far away or I would take one. The last time we got an animal from there it was quite an experience! A very good friend got a frantic message from his son in the US.  His pitbull had killed his girlfriend's dog and now it was either her or the pitbull. So, he made arrangements for the dog to come here. He arrived on a holiday and the veterinarian who would clear him was nowhere to be found at the Airport. His son had put a leash and chain that were clearly visible in the cage but who was going to bell the cat, the dog was big and looked mean. My friend told me that I know a bit about dogs and that is why he had asked me to accompany him! Well, finally I got the leash on him and took him out of the cage. In the meantime, the doctor had not been found and the staff was getting disturbed because the boss of the airlines had phoned them beforehand to make things easy for us. Finally, they told me we could take the dog and they would tell the health people that the dog ran away! Luckily, the doctor showed up and we got the papers and left. The dog turned out to be a well behaved sweetheart and lived to a ripe old age.

I am sure they were amazed by your hat. Have you ran an ad in the local paper? Be sure to get Mama fixed or you will be over run before long. Good luck and stay safe

Oh what sweet babies! I remember when mine was that little. Not sure I could do the kitten thing again at this point. This is Smokey. 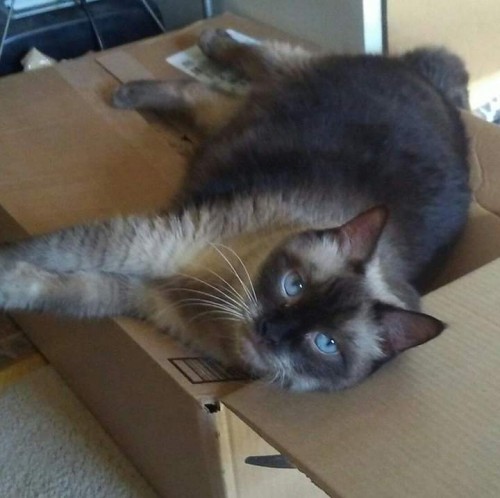 Wow! What a gorgeous cat!

Those babies are beautiful! Hopefully Momma has stopped nursing by now so you may want to visit the Vet for a Spay so you don't have six more beauties for Christmas presents!
lol Pup

Can I get a kitten

Are there any left or are they all taken. Oh my name is cheryl and I'm looking for a four legged fur baby to keep me company. If one is available please let me know. 757-486-7905. Thank you

Ostomy Memories Gets Poetic
Hello....I'm new here
Schedule upcoming for Reversal
Prayers and good vibes Please
Itch and ouch
Trussed like a turkey
Which direction do you sit to empty?
Nerve pain around stoma
First time ordering supplies with Insurance
Hamburger buns with seeds on them

Holiday swimwear for men
Off center rosebud opening
Loud stomach!
Oh, sticky-poo and my colostomy
Does your Ostomy Bag get in the way when having sexual intercourse
Ostomy Memories of Advertising
Barbie butt surgery
Ostomy Memories of Odd Jobs
Pouch ballooning; gaining weight; foods to avoid and exercise limits
Going in for "Barbie Butt"
All times are GMT - 5 Hours
Currently online: 18
1 members & 17 visitors