PETER, PAUL, & MARY wanted to know “where have all the flowers gone?” My question is: what happened to all those wonderful car hood ornaments? Today, most cars look so alike, it takes a car fanatic to distinguish one brand from another. At least you can find one in any color that you want, unlike when Henry Ford started making his eponymous brand. “Any customer can have a car painted any color that he wants,” said Ford, “so long as it is black.” In those early days, the iconic hood ornament started out as a topper for the radiator cap which, in the beginning, was on the outside at the front of the hood. Even after that was moved under the hood, however, the fancy hood ornament had become a staple that identified the brand. As it gained prestige, however, it became a focus of thieves and collectors. In addition, safety concerns came into play as pedestrians, when struck, might suffer worse injury if the car sported a dangerous hood ornament (really, that was the argument). So they passed into history, along with the Edsel. Here’s a photo of just one of the most notable hood ornaments: Mercury’s “Winged God of Speed.” 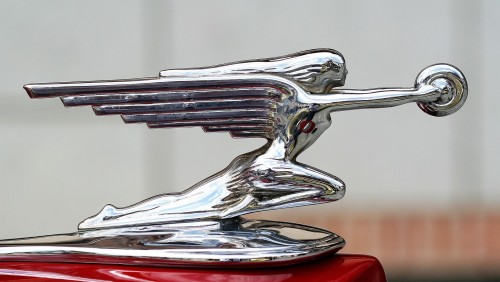 I used to like the jaguar on their e-type.

Hi Henry,  Great post, but I have to take issue with "at least you can find one in any colour you want".  If you have shopped for a car in the last ten years or so, you will find that you have a wide selection of colour choices, that is as long as your choice is either black, white or gray.  I never realized there were so many shades of white and gray until the car companies decided that is what we all want!  How boring!  Most of the car companies will include at least one or two really daring colours, like a shade of blue or red, but that is as adventurous as it gets.  If you lose your car in a parking lot of gray, white and black, good luck finding it! I bought the brightest red car I could find and I never have any trouble finding it as it sticks out like a sore thumb!

An App Designed For You
Convatec
Introducing the My Ostomy Journey App. Track your ostomy journey with ease.
see more

Hi Henry have you seen the commercial of the riding in a convertible singing and the hood ornament like you showed is singing along with him, its a catchy tune.

I have seen it, Ron.  That must have subconsciously given me the idea for the post.

Have you seen a commercial on television where a hood ornament is singing along with the driver?

I don't even know if it's a commercial about cars or not. I just remember them singing. Lol!

I've seen it.  Perhaps that's where I subconsciously got the idea for the post...  who knows?

My favorite memories about hood ornaments dates back over 40 years to my college days. We used to walk down the rows in the parking lots turning the hood ornaments 90 degrees (most of them were mounted on springs to avoid the danger to pedestrians) and then walk back a few days later and see how many were still turned! (I know; SO immature. What can I say? We were kids!)

And my very first car was a bright orange metal fleck Chevy Chevette. No hood ornament, though. Rats!

Work from home/remote work
Which direction do you sit to empty?
Question for the Pros...Cups????
I need someone to hear me
Get your Boo On
‘Stealth Belt’ and deodorant?
Lost my Mind
‘Tis The Season To Be Spooky (fa-la-la-la-la, fa-la la la)
How do I change Medical Suppliers?
How to slow down digestion and bag changes