I know many of us worry too much! 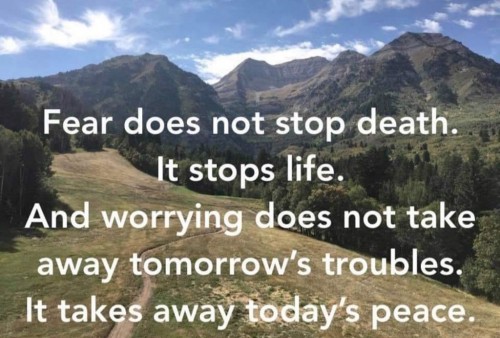 This is so true Penguin. When I was younger I worried quite a bit. Now hardly at all. I have heard that 97% of the things one worries about never happens.

This is so true fear stops us from moving ahead. We have to use good common sense but not let fear paralyze us.

MeetAnOstoMate - Meet & talk to fellow OstoMates
MeetAnOstoMate
MeetAnOstoMate is not a typical ostomy website but rather a vibrant multi-topic community where people have fun, discuss various things, and give each other love and support.
read more
Mtnman
Reply by Mtnman, on Fri May 15, 2020 1:53 am

The pandemic for instance can be paralyzing for some I think and it's kinda like fear of terrorism it can really be gripping for some. I know I was glued to the television when 911 happened but that was an attack on our soil. The virus has ravaged the whole world. I know people can be very fearful but we can't let it control us. Yes we must be careful and self quarantine but that doesn't mean we should be glued to the TV.

Good advice. However, much of the apprehension re Corona stems from the fact that it is an enemy you cannot see, touch, or hear, perhaps a different approach is required  to tackle this adversary. Some suggest that the fight must be led by scientists and doctors and not by politicians.

I do like the quotation, as fear can be quite debilitating, especially when it is somewhat irrational. However, a certain degree of rational fear is also functional in keeping us alive. For example: Here in the UK, it might be deemed as irrational to be afraid of spiders or snakes because none of our nastive species will do anyone that much harm. However, elsewhere in the world, where these things are venomous and can kill, it would seem like common-sense  to be afraid, or at least wary of such things.  Corona virus is a killer for some people, and therefore to have a rational fear of such a thing may well motivate behaviours which will, keep people alive for longer than they might otherwise be. l do like Bowsprit's concept of leaving politicians out of the decision making process, but then again, I think this should pertain to everything else as well as virus control.

We should perhaps bear in mind that the biggest killer on Earth by far - is the human species, so maybe our fear should be proportionate to what kills the most.

Hey Penguin, the title of your post is most informative. The word “fear” defines something we don’t want to experience but being totally fearless of everything might not be such a good idea. It took me nine days to reply to your post because I worried about getting too deep. FDR warned us about fear and at that time, in that place, it was good advice. As ostomates probably all of us experienced fear at one time or another relative to our situations. How we reacted to that emotion reverts to the title. The mere suggestion of an ostomy could’ve induced anxiety, even panick, and certainly worry as to how the heck we’re gonna handle it. Some of us might have experienced the absence of real quality in our lives because of the fears from our perception of the future. We are where we are today which is probably a good thing given the alternatives. Did our worrying help us get here? Will we remember to question in the future our perception of the future using the past as our guide? Unfortunately I guess we’ll still suffer from that same desease; being only human.
I’m not going to fear worrying too much. Instead I’m saving your post and all the wisdom shared in the replies.
Thanks to alll,
Mike

I have Been Doing Some Thinking ....

Anybody have a cool old barn?

What a Wimpy World!

It matters where one lives ..

I suppose some coronavirus quarantines are better than others

Exercise for a ileostomy for a female person

How to Sleep on Your STOMACH with an Ostomy!

Dating with an Ileostomy

TimeToGrow (m)
☰
Welcome to MeetAnOstoMate - the largest online community for people with an ostomy.
If you have questions or just want to meet and chat with others, join us and enjoy our great community.