Ostomy Memories on the A.T.

The idea stuck in my craw at first. Four days on the Appalachian Trail (the A.T. to us cognoscenti)? I’d never even been camping before. My wife was excited at the prospect, though. I could see that she wanted to go. At the time, I was changing my ostomy every fifth day so, barring some problem, I would be okay. But problems were a distinct possibility, I said. I’d be sweating a lot, which could necessitate premature changing. In the middle of the woods? With no hot water? What would I do, sit on a rock? We went. I stuck two ostomy changes in my pack and hoped the heat wouldn’t mess with it. We had a borrowed tent, a water filter, a small camp stove, all the gear we needed. From our research, we knew where all the springs were for water refills. The most important item which each of us had was our poncho, since it poured unremittingly for the first three days. The trail was either uphill or downhill; that was it. It was awash most of the time. We had to keep wringing out our socks. There was no scenery to marvel over, since the trail itself, where we were in North Carolina, was a green tunnel. We had to keep our eyes focused on the three feet directly before us so as not to trip on a protruding stone or tree root. My intrepid spouse enjoyed herself much more than I did, but we reached our goal. Filthy, caked with mud, damp all over, hungry as black bears, we stumbled into the Nantahala outdoor center restaurant and chowed down. Needless to say, I haven’t been in a tent since.

As an AT section-hiker, I've often taken trips like this one in order to accumulate miles...but only by myself.  I would never take a friend or loved one on a wet slogg such as this.  For me, the solitude is worth the tribulations but others usually want perfect weather and a payoff; magnificent views, waterfalls, or at least a city stop and with a craft brewery or two.  As opposed to starting out on a week-long slogg, I'd perhaps urge new AT backpackers into doing destination day hikes to a nice view or even an overnighter to a shelter where you can chat with other hikers.  The AT is an amazing trail that we're so fortunate to have her in the US. It can change lives.

As for backpacking with my ostomy appliance, I bring alcohol wipes which is all I need to change it, if that becomes necessary.  I think I've only had to change it once in the almost 300 miles I've hiked on the AT.  I would caution those with protruding stomas to make sure the backpack hip belt will not interfere, as they tend to sit right overtop of stoma location.  My stoma is flush to my skin and I wear convex wafer, so I do not have any issues with irritation from the hip belt.

If anyone is interested in getting out on the AT or any other trails for a few days, don't hesitate to contact me with questions. 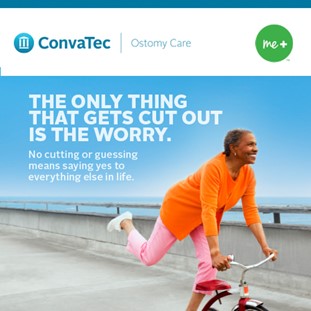 The Only Thing That Gets Cut Out is the Worry
ConvaTec
Discover how ConvaTec Moldable TechnologyTM makes everyday living, better.
read more

I heartily agree with you about the benefit of solitude on the trail.  I had a favorite hike in southern Utah, about seven miles west of Bryce Canyon N.P., where I often hiked solo and only encountered another person once.  I recommend to you a wonderful essay entitled "An Entrance to the Woods" by Wendell Berry.  It is his well-written description of going alone into the woods of Kentucky.  "Though from the high vantage point of this stony ridge," he wrote, "I see little hope that i will ever live a day as an optimist, still I am not desperate.  In fact, with the sun warming me now, and with the whole day before me to wander in this beautiful country, I am happy."

Another good story thanks for sharing, Best wishes and stay safe

Advertisement
SenSura Mio - Fashion
Coloplast
All SenSura® Mio pouches are intended to be discreet and comfortable to wear thanks to a special fabric designed to not be seen through clothes, but also is waterproof, and doesn't crinkle. From wearing skinny jeans, to swimming, exercising, and socializing with friends, with SenSura Mio one- and two-piece pouching systems you set the limits to your fun.
read more

Ya know, Mark, I'm really interested in you and/or Henry doing the AT thing.  Thanks for the offer but I'll be so happy with you sharing your experiences.  I'm doing my hiking in the local parks on walking paths, never exceeding about a 2% incline but I'll be thinking about you somewhat enviously.
Enjoy,

The AT runs through New Jersey.  I've been told several times the NJ section of the AT is surprisingly beautiful and underrated.  You'd truly be surprised how well us ostamates do in the woods. I'm in Maryland so let me know if you'd like to try an overnight trip.

Thanks for the invitation, Mark.  I would love to do an overnighter but I won't because I'm way too old and if I did successfully accomplish it I probably wouldn't be able to shut up about it. I think Bob is in Maryland and he might just be waiting for an invitation.

The invitation is open to anyone who wants to go.  Just let me know.  Also, I manage a UOAA affiliated support group (ASG) for local outdoor activities where members can post local activities and events. Check it out here: https://www.facebook.com/groups/353856981953889/about

Please feel free to join. It's a small private group. The public (non-members) can't see anything except the name of the group.

Oh, and grandma Gatewood is famous for hiking it several times, using a potato sack as her backpack. lol. Talk about inspiring!

We never managed to get onto the Appalachian Trail, although we have day-hiked many other trails in West Virginia, Kentucky, Tennesse, Mississippi, Wyoming, Montana, North Dakota, ... (Have slide-in camper, will travel!) Unfortunately, it's not the stoma that gives me problems and has curtailed our hiking, but the neuropathy in my feet. I can no longer trust my feet to stay on the trail, and some of the trails we have hiked in the past that were perfectly safe with healthy feet are not worth the potential falls any more. Nowadays I stick to the tamer trails in the local parks and nature areas. But I'm certainly glad I have my memories! Including one hike of about an hour or so that we did in ponchos and water shoes because of the rain - including our kids, about 8 and 10 at the time! We all had a blast!

Sorry to hear this, Dana.  I'm glad you're able to still get out for local hikes (and to know it's not your appliance causing trouble).  Is it true exercise is useful for alleviating symptoms of neuropothy?