I'm 35 and my husband of 12 years passed away, he loved me so much and he could care less about my ileostomy, but now im thinking about dating and I'm scared, I've always been subconscious about my ileostomy and now it's worse. I don't get sick as often but still. What has been everybody's experiences? When do you tell somebody about it? I usually tell people right away that I meet but I was not dating then lol

I'm so sorry for your loss.  It seems much more difficult to be with someone you love and don't have to worry about what people think and then having to start over can be tough.  But even people without ostomies have to deal with the discomfort of getting to know someone new.  I'm also sorry for the long post.

There are so many previous posts on this site with multiple opinions.  I'll share what I've learned from myself and from other people and apologize in advance if it sounds like I'm talking out of my arse.

After my surgery at 23, I was scared that I wouldn't be able to date or be naked in front of another woman ever again without feeling like I was grossing them out.  But I was confident, maybe even a little cocky.  And I like you, would tell people right away about my ileostomy.  Having an ileostomy didn't stop me from being me.

Most of the time, I wasn't even trying to date a woman, more like meeting a woman at a bar or social function.  And during the course of the conversation, I would bring up the fact that I'm an ostomate.  I would make it a funny conversation along the lines of, "Oh, I had this surgery when I was 23, I have a scar from mid chest to my groin and I don't shxt like everyone else anymore."  I honestly NEVER had a woman stop talking or associating with me because I had a bag.  And dating or casual experiences were never an issue to me.

Now, that is my experience.  From other posts I've seen here, men and women both have a lot of anxiety about dating with an ostomy.  Some because they have problems with leakage, self body image issues or just feel gross, half a person or broken.  Others just have a problem with rejection.

I've also read that it is easier for a man with an ostomy to be accepted than it is for a woman, as women, not all of them, aren't always drawn to a man because of his looks.  Opinions vary.  Men on the other hand, not all of them, are usually drawn to women who are attractive or aesthetically pleasing to the eye, first and foremost, and then later attracted to other qualities about a woman.

Again, this is my opinion or summarization from what I've read in the forums here, and my own personal experiences.  Your own experience will depend on what you're looking for.  Be it casual dating or if you're looking for a long term relationship.  You may have to get through a few bad apples before you find a person that is comfortable with it.  Then again, another mister right, may be right around the corner.

Don't give up trying though.  Put yourself out there.  If you tell a potential date you have an ostomy and they are horrified, think in the terms of, "Well, if he can't handle an ostomy, maybe he won't do well in a critical situation either or be a good provider, therefore, he isn't up to my standards."  It may make your selection a bit easier and weed out the men from the mice.  Then again, you'll probably have to deal with guys that just want to have a one night stand, whether you have an ostomy or not.  It depends on what YOU want.  You only live once though.

I hope this long post helped you in some way or form.  You've taken the first step to dating again.  Be brave.  And remember, we're all here for you if you should need us. 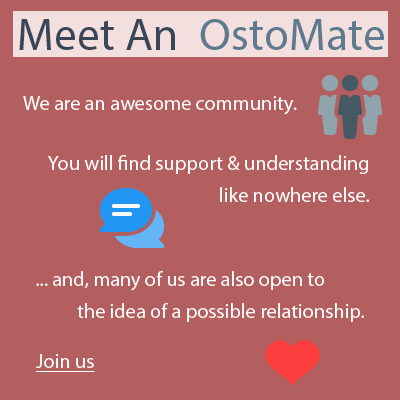 Hello Roseym. Thanks for your post and my condolences on your loss.

I just wanted to say that I appreciate Bain's reply as it portrays much of what I might have said if he had not writen it so eloquently.

Personally, I find it a daunting task to find a man! I turn and run the other way! Not sure how to get past this hurdle!

The Hollister COVID-19 Support Hub
Hollister
Do you have all the information you need to support your ostomy patients during this challenging time? Head to our COVID-19 hub for guides on how to use ostomy products, maintain healthy skin around the stoma, resume lifestyle activities, and more.
read more
Ewesful
Mon Jan 30, 2017 7:12 pm

Bain and Bill are right on -- if you are nervous it will show and there is no need to be skittish     - thousands of people have ostmies and it is not abnormal. It is what it is and when you like yourself and accept yourself as I am sure you do, then just forget it and go on being a good person. Date and enjoy.  you don't discuss bathroom matters on dates whether it is a stoma or not so why bring it up....

If you had a missing finger or toe, false teeth, a scar, whatever....do you tell someone or worry about it? It is all the same, so go proud -- you chose life!!

Once a person gets to know you and enjoy you, then a stoma should not be an issue.  Also, I  wear a stoma cover - mine is natural and blends with my skin, it holds the bag when I am in a dresss or whatever and is sleek.   Another layer of protection.

My name is marsha, and Like the others, are so sorry for  your loss.   Be it through death, or divorce.....starting over is never easy.   And age, be it younger or older....doesn't make it easier either.

I had my surgery when I was a teen, ( for ulcerative colities) so I dated with my ostomy the first time around.  After being sick ( and home or hositalized for 4 years) I wasn't going to let anything get in the way of my new & healthier life.

Bain made excellent points in his post...   You have to know how you feel about you, before you can decide about someone else.   I knew....even back then ( I'm 68 now)  that if a boy/ guy or even a girl friend, couldn't handle my ostomy, then he wasn't the one for me.  It's my badge of survival.

I did marry ( a man with an ostomy as it turns out) but that wasn't enough to hold us together.   We did have two wonderful children, but divorced after 24 1/2 years of marriage.

Dating the second time around, is both easier and more difficult than the first time.   This time, I'm more aware of what I like and need in another person...than I did as a kid of 20.   Generally speaking, if I really like someone, and I think it's going to go " intimate" I tell about my surgery sooner rather than later.   It makes a difference to some, and not at all to others.   I'm ok either way.....as it's just a first step.

Your are a  young woman.....and you have a long life ahead of you.    Dating the second time around....gives you the opportunity to do things a bit differently than you did the first time....so try to put the anxiety and fear aside, and have a good time.  You deserve it.!

i was with my husband for 30 years and had only started considering dating before my surgery.

I am 64 years old and it's too funny to call it "dating" at my age but I know I don't have to be alone and that is what you do to meet somebody, right?

i think that becoming attracted to Sumone should be a natural healthy response. The trouble with that is that I'm such a recluse I don't ever meet anyone who is a likely candidate to get to know better.

Honestly before my surgery I was afraid of being intimate because I have lost a lot of weight and have saggy skin. When I was dating as a teen I was fearful because I thought I was fat. (Wish I knew then what I had going lol.)

The point being that it's just plain scary and add to that all the weirdos we might meet no wonder I'm reclusive.

I have had my ostomy reversed but now have a checkerboard of scars across that same excess flab so I think I will take it really slow and although the new morals take intimacy for granted I don't intend to make any grand announcements but rather, take things slow and be sure of what I'm getting into.

Of course, I'm twice your age and don't have raging hormones anymore so I'm sure it's easier for me to say but I just wanted to share my thoughts to you.

p.s. However I do remember what animal magnetism was like and that sure was a lot of fun! (Blush, blush)

I know where you're coming from, Roseym.  Remember that he didn't care about it.  You need to move towards that attitude, as well.  If you are uncomfortable, that will make others uncomfortable as well.  As to when/if to tell them, I think that if you are thinking about getting intimate with them, that is when you tell them.  But also tell them that it won't stop you, you can still be as intimate as any other person, just with a few accomodations...   GeekyJen

Idea: 'Tis The Season To Give

Does anyone know of any Ostomy undergarments that actually work and look nice?

Why do you change your barrier when you do?

I just need to Vent!